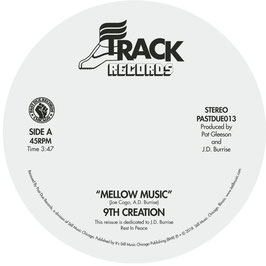 “Mellow Music” is the most sought after 7” from 9th Creation. This single marks the band’s new direction and was announcing an album that remained unreleased.

This single is a much sampled killer funky stepper with heavy bass, synth, horns and massive vocals. Essential release that sells for well over $1000 if you are lucky enough to find one!

About The 9th Creation:

It is well known that talent never guarantees any success in the music industry. This sentence summarizes the story of The 9th Creation, one of the best soul, funk, disco and boogie band to make it out of Stockton, CA.

Founded by J.D. and A.D Burrise in 1970, the 9th Creation went on for almost two decades and released 3 albums and half a dozen singles that regularly flirted with the US Charts, getting them featured on Soul Train in 1975 and allowing them to tour North America and Japan a few times over. 9th Creation regularly shared the bill with Irma Thomas, James Brown, The Whispers, The Sylvers, The Main Ingredient, Con Funk Shun and many others.

The music that J.D, A.D Burrise and their 10-12 band members created was a perfect combination of West Coast raw soul, disco and funk that resulted in a religious fan following across the globe.
To this day, The 9th Creation has been sampled by Pete Rock & C.L. Smooth, Artifacts, Quasimoto, 3rd Bass, Basement Jaxx and many others.

9th Creation was undoubtedly one of the greatest funk band of the Seventies.

Past Due Records is proud to officially reissue the 9th Creation’s essential full lengths and singles, carefully remastered and all in their original artworks.